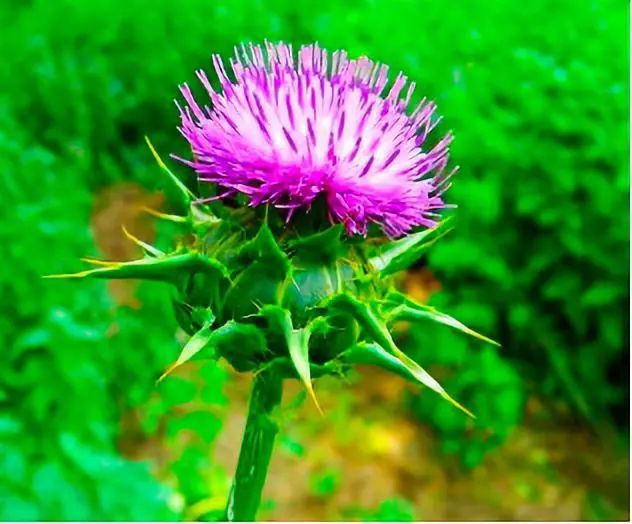 Silybum Marianum Extract, also known as milk thistle, is native to the Mediterranean region. It has been used as a medicinal plant for nearly two thousand years. It is still widely used as a very effective liver protection plant. It can help the liver to detoxify, and it can also be used to control chronic liver disease. Silybum marianum can activate the regeneration of liver protein, restore the activity of liver cells damaged by alcohol and viruses. It can also remove free radicals, maintain the permeability of liver cell membranes, reduce the damage of toxins to the liver, protect the liver from long-term drinking and injury. People with acute and chronic hepatitis, fatty liver, cirrhosis and toxic liver damage.

Silybum Marianum Extract, also known as silymarin. It is a mixture, the main active ingredient of which is silibinin. The chemical structure of silibinin is shown in the figure above. Silibinin mainly exhibits antioxidant effects in the body, which can inhibit the production of free radicals and inhibit lipid superoxidation, thereby protecting the liver. The water solubility of silybin is very poor. Therefore, the extraction method of silybum must adopt the extraction method of vegetable fat-soluble, but not the water-soluble method. Therefore, even if thistle plant is used to soak in water, it will not have much effect. The bio-tolerance of Silybum marianum extract is very good, even if adults take 13 grams per day, there will be no obvious poisoning reaction. Milk thistle extract as the main ingredient of medicines, such as Legalon and Silimarit have been used in Europe for many years, mainly used for liver detoxification and treatment of chronic hepatitis and cirrhosis.

In China, relevant scholars have also done a lot of pharmacological and clinical research on thistle extract. Li Rongping and others discussed the effect and mechanism of silybin on hepatocyte swelling and death in acute liver injury. Experiments show that silybin can significantly reduce the activity of serum transaminase in acute liver injury model rats, and the microscope shows that the degree of liver tissue injury is alleviated and liver cell swelling and death are reduced. Liu Sandu and others observed the efficacy of silibinin in treating alcoholic fatty liver disease. Experiments have shown that silibinin is effective in treating alcoholic fatty liver disease, which can improve liver function and lower blood fat. The total effective rate in the treatment group was 86.7%, and that in the control group was 46.7%. The effect was significantly better than the control group, with definite efficacy and safe application.