Naringin is a complex of glucose, rhamnose and grapefruit ligand.White to light yellow crystalline powder.Naringin has a very bitter taste, and 20mg/kg aqueous solution still has a bitter taste.Slightly soluble in water, easily soluble in hot water, ethanol, acetone and warm ice acetic acid.Phenolic hydroxyl group exists in the structure, and its aqueous solution is weakly acidic.The product of hydrolyzing and hydrogenating "guanosine dihydrochalone" is used as sweetener, and its sweetness is more than 150 times that of sucrose. 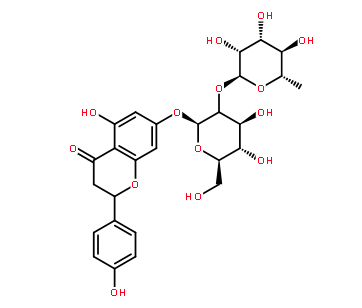 The role of osteoporosis.The mechanism may be through inhibiting the expression of specific genes during osteoclast differentiation.

4. Anti-cancer effect.The main mechanism of action is that naringin can inhibit the activity of several kinases in the signal transduction process of cancer cells, so as to limit the proliferation of cancer cells.

5. Antioxidant activity.Naringin can alleviate the organ damage of diabetes by inhibiting oxidative stress and inflammatory response, so it has a certain relieving effect on diabetes.

6. Detoxification of arsenic poisoning.Arsenic poisoning can occur when food and water are heavily contaminated and can cause serious cardiovascular hazards.Naringin can repair heart failure. After arsenic poisoning, ingestion of naringin can effectively relieve the elevated level of nitrous oxide stress and the decreased activity of sodium pump in the heart.