Genistein, also known as genistein, dye isoflavones, is mainly an active ingredient extracted from legumes such as soybeans, clover, pueraria, locust, genistein (gorse), and broad bean root. Known as phytoestrogens. It has a variety of pharmacological effects such as its estrogen-like effect, anti-tumor, anti-diabetic, and prevention of cardiovascular diseases.

Genistein has the effects of inducing programmed cell death, improving anti-cancer efficacy, and inhibiting angiogenesis. It is a potential cancer chemopreventive agent, and its anti-cancer effect and mechanism have broad application prospects. 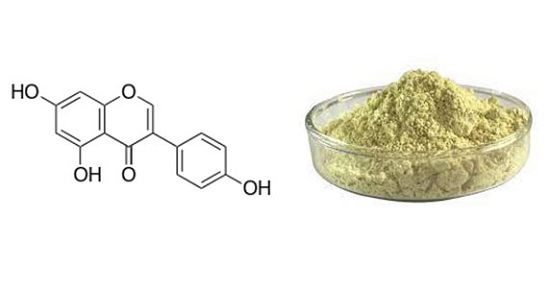 Genistein has two-way regulation of estrogen levels in the body and selective binding to estrogen receptors.

2. The role of genistein powder and cranial nerves

Genistein has the effect of promoting cranial nerve regeneration and cerebral coma. After changing the route of administration, genistein can pass through the blood-brain barrier, and by affecting the Ca++ receptors on the brain cell membrane, it can protect brain cells when stroke (cerebral hemorrhage) and stroke (cerebral infarction) occur.

Genistein inhibits tyrosine kinase activity, topoisomerase activity, estrogen and anti-estrogen-like effects through antioxidant effects, and reduces tumor angiogenesis, and has inhibitory and therapeutic effects on a variety of cancers.

Some people in the United States use genistein to have anti-radiation effects and use it as a preventive and therapeutic product (Bio 300) for the side effects of tumor radiotherapy. It is reported in the literature that genistein is taken before traumatic brain injury (7.75Gy). It can also reduce lung damage in long-term survival animals.

Genistein has weak estrogenic activity and has the effect of estrogen. Studies have shown that women will experience a series of symptoms of menopausal syndrome due to the degeneration of the ovaries and the reduction of estrogen in the body during menopause, and they will take a certain amount of genistein during menopause. Supplements the lack of estrogen in the body and plays a role in preventing and reducing women's menopausal syndrome. Experiments suggest that estrogen-like effects may be the main mechanism of genistein to prevent osteoporosis.